I bought some Simple Mills vanilla cake mix and

vanilla frosting to make Coral cupcakes as part of celebrating her 2nd Diaversary or the anniversary of the day was she was diagnosed with Type 1 diabetes. I pureed fresh strawberries with a bit of water and a dash of Stevia. I don’t bake much nor do I measure before adding certain ingredients. I’m also pretty damn good at carb guessing. 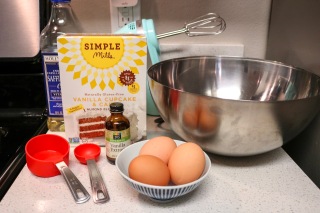 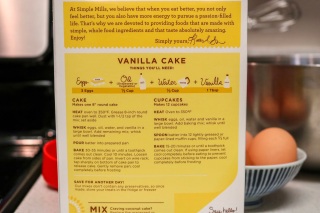 Some of the reasons why I decided to add my own twist on the cake mix was because the first time I tried it – almost a year ago, it came out really dry and I made it as instructed on the box. Secondly, Coral absolutely loves strawberries! She’ll eat ’em year round with a bit of honey or Stevia to sweeten them.

I was afraid I might have added too much water, but no more than 1/2 cup when I blended it with the strawberries. I was pleasantly surprised at how moist they came out!

I had finished baking the cupcakes (takes about 24-30 minutes) around 12:00pm that Saturday before we met up with some friends at the mall (previous post). I stored the remaining strawberry puree in the fridge with a closed lid. When we returned, I tried my best to mix the puree with the entire container of Simple Mills vanilla frosting, but it was so oily or buttery in texture that it repelled the rater watery strawberry puree. I was bummed since it didn’t come out smooth like I had envisioned no matter how long I mixed it with my Kitchen Aid hand mixer. At least it was a beautiful natural dark pink color (as shown above). 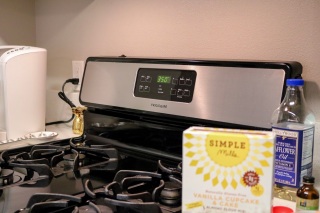 Coral took one bite and was like, “Mmmm! Mommy, I like it! It’s soo good. You’re the best cook ever!” Really, she says that quite often – almost every meal.

Her starting BG was around the low 100’s and I bolused her for half a cupcake with frosting that Saturday night. Basals were set for a high protein snack like the Premier Protein with Fairlife Milk (2-3oz PP/1oz milk) for the past few weeks as needed. However, this damn cupcake kept her high ALL night long. I gave multiple corrections with her pump and she just would not come down. I even set temp basal increases of 20% for 1-2 hours at a time and finally brought her back down to the low 100’s before breakfast. That first night was a brutal battle of the ‘betes for sure. Trust me, it wasn’t anything else she ate or drank nor “dawn phenomenon” (growth hormones – haven’t seen that in a long time).

So, I decided to test my cupcake / frosting theory again the second night on Sunday. Same exact thing happened even though I gave her a bigger bolus than the previous night and increased a couple more basals from 10:00pm. This mama was exhausted by Monday. I said to myself, “That last cupcake remaining in the fridge,” as I opened the door to let the cold air hit my face and feet. “I’m gonna eat it when she’s sleeping.” 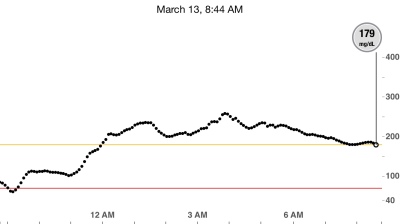 It is now Thursday night and I did just that. Try Simple Mills vanilla cake mix and frosting if you like, but heed my warning: It may make you spike and keep you high all night. May be it’s because of the monk fruit in the frosting and the high fiber content. Who the heck knows?! Strawberries wouldn’t keep her or most diabetics high that long because it’s a simple carbohydrate and breaks down into glucose quicker than starches.

If you’re not on a pump, this might be an extremely challenging food to process and may be best eaten or experimented with during the day. Most new foods take a lot of practice to get the timing of the bolus right and to see how it affects your blood glucose 2-4 hours post-prandial (after eating). I’m happy she enjoyed it though. Referring to the frosting more than the actual cake, as usual.

As I’ve said before on my Instagram, some foods are worth the bolus. Unfortunately, this time and particular item of the Simple Mills line was not. However, we do love their new Soft Baked Chocolate Chip and Snickerdoodle Cookies. Some of our tried and true favs from their line include: Crunchy Chocolate Chip Cookies, Banana Muffin Bread, Chocolate Muffin mix, Banana Muffin mix, Pumpkin Muffin mix, and Farmhouse Cheddar Almond Flour Crackers. Yep, we’ve tried many of their products and they still remain one of our favorite brands since we started this T1dLife. Go to SimpleMills.com and let ’em know Shelsea of Typeonediabetic-life.com referred you. No, you won’t get a discount, but at least they’ll recognize where a certain percentage of their revenue comes from – the Type 1 diabetic community. Sadly, I have no sponsors yet. That would be a nice added perk of running a blog for Type 1 diabetics, wouldn’t it? This has been an honest review to share our experiences with you in hopes that it will work in your favor should you decide to try it for yourself.

Shelsea is a mother to her six year old Type 1 diabetic daughter, Coral, and non-D daughter Kaila. They believe you can still have fun living with Type 1 and maintain a healthy Hba1C with little diet restrictions.

Get Social With Us