as we enter Week 2 of daily factual posts throughout the month of November. I hope you’ve all been keeping up with my daily posts from @type1diabetic_life (aka T1dLife) on Instagram. If not, no worries. I’m just glad you decided to refer to my blog instead. Feel free to follow @type1diabetic_life and share these posts, but don’t forget to give credit to T1dLife when reposting. Much appreciated and malama pono (“live well” in Hawaiian). 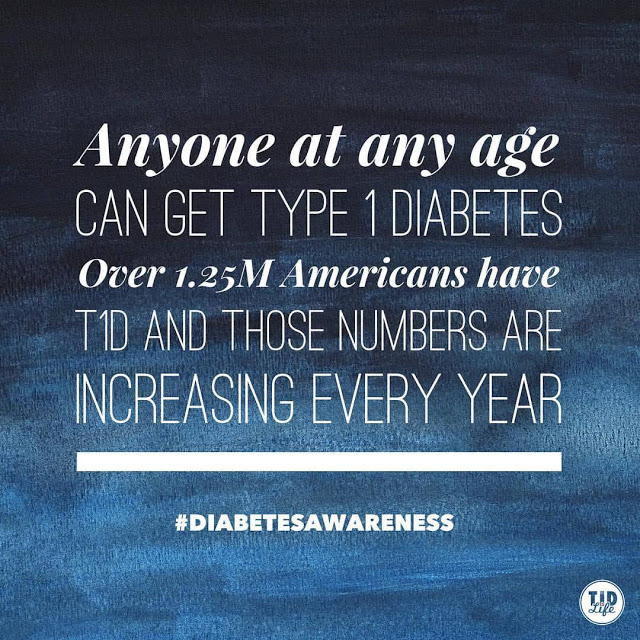 Day 6: Did you know that almost anyone at any age is susceptible to Type 1 diabetes?

1.25M Americans are living with T1D including about 200,000 youth (less than 20 years old) and over a million adults (20+ years). I hope this opens your eyes if you’re a non-T1d. Be aware of the warning signs and contact your physician ASAP: ⚠️
* Extreme thirst 🥛🥛
* Frequent urination 🚽
* Drowsiness or lethargy 😴
* Increased appetite 🤤
* Sudden weight loss🚶🏻‍♀️
* Sudden vision changes👀
* Sugar in the urine (testing done at hospital) 🏥
* Fruity odor on the breath😯
* Heavy or labored breathing😟
* Stupor or unconsciousness 🆘
. . .
Source: Jdrf.org 🌐

as having a glucose level of 65mg/dL (3.6 mmol/L) or less for healthy adults and less than 70mg/dL for toddlers like my precious Coral. People who are Hypounaware may have a blood glucose (BG) of 50 mg/dL and not feel any symptoms at all. The point at which an individual may experience any hypo symptoms varies from person to person, event to event, and dependent on their average BG range. For example, Coral’s BG is usually between 80-180 and she’ll become irritable, sweaty, hungry, stubborn, and unconsolable if she’s lower than 70. She may not recognize that these are symptoms of hypoglycemia yet, but will sometimes tell me, “My tummy hurts” or “head hurts.” Other examples of hypo symptoms include:
* Feeling amped up or nervous 😟
* Resisting help 😒
* Tingling lips or fingers👄
* Nausea🤕
* Vomiting🤢
* Shaking 👋🏼
* Fast heart rate💓
These are from stress hormone release whereas the following symptoms below are from low glucose in the brain: 📝
* Confusion 😓
* Poor concentration 🔢
* Mental slowness 🐢
* Blurred vision 👀
* Sudden tiredness 😴
* Silliness 😜
* Frequent sighing 😞
* Yawning 😲
* Inability to form words 🤐
* Headache 🤕
* Seizure 🆘
* Coma 🏥
Treat all and any symptoms of hypoglycemia quickly even when symptoms seem mild, with fast-acting carbs (juice, 1 Tbsp honey, glucose tabs, Smarties, etc). *To non-d’s: TYPE 1 DIABETIC’S DONT TAKE INSULIN TO TREAT LOWS – THAT WILL MAKE THEM SEVERELY LOW AND CAUSE DEATH. 📚
. . .
Source: Walsh, John and Ruth Roberts. “Pumping Insulin,” 6th ed. P 169-171. 📘

Carbohydrates are what affect a diabetics blood glucose (BG). “Sugar free” can be put on a food label if the food doesn’t contain any sucrose (table sugar). However, a sugar-free food may contain complex carbohydrates, fructose (fruit sugar), and a variety of sugar substitutes such as sorbitol, maltodextrin, maltitol, xylitol, mannitol, lactitol, and isomalt. Our most favorite sweeteners are Stevia, Truvia or Swerve, and xylitol – if we’re desperate. These don’t seem to raise Coral’s BG so far, but do some experimenting to find out for yourself. Find it at Whole Foods, Sprouts, Ralphs, or Amazon.com. Share and tag @type1diabetic_life. 🍪🍚🍔
. . .
If you’re an RN, physician, or even a receptionist at a hospital, don’t tell a Type 1 diabetic to stay away from sugar. That’s just annoying. Btw, T1ds can eat anything any non-diabetics can, within moderation, as long as they bolus accordingly and time it precisely before consuming anything with CARBOHYDRATES. 🎓
. . .
Source: Source: Sources: Scheiner, Gary, MS, CDE. “Think Like a Pancreas, p 52-54. 📔

It keeps #type1diabetics alive. T1ds are #insulindependent as a result of their immune system attacking the insulin producing beta cells in their pancreas. Whereas Type 2’s are #insulinresistant and may manage their diabetes with a healthier lifestyle change, pills, or insulin as their pancreas kicks the can from work overload. There are two different types of insulin: Basal (long-acting) & Bolus (fast-acting for mealtimes). Insulin is given by syringe injection or a pump. 💉📟
. . .
A “normal” persons pancreas secrets a small amount of insulin into the bloodstream every couple of minutes and should match that of the livers secretion of glucose through the day and night. Not the case in a T1d so, they rely on basal insulin from brands like Lantus (glargine) or Levemir (detemir) which needs adjusting depending on growth, activities and stressors. Everyone’s basal rate is different and takes around 3 days to see the full effect. 🗓
. . .
Bolus insulin such as Novolog or Humalog is typically taken 15-20 minutes prior to a meal based on total carbs to be consumed. Carbs usually take about 10-20min to raise the BG. However, with a #T1dtoddler, who has an ever-changing picky palette, we can’t always bolus Coral before a meal in case she doesn’t eat the entire 15g carbs from the spinach dip and tortilla chips she used to love. Therefore, we stick to the same meals so there’s less variance in BG (blood glucose) and can then proceed to bolus for those dumplings or something we know she’ll eat. Fast-acting insulin is also needed when BG is too high (over 180mg/dl for Coral). T1d’s can eat anything non-diabetic people can – in moderation, as long as they bolus correctly and account for anything that would cause insulin sensitization. Timing and injecting the precise amount of basal or bolus insulin is an art form. Bon appetite! 🍣
. . .
Source: “Think Like a Pancreas” by Gary Scheiner, MS, CDE

improving the body’s sensitivity to insulin. This process is known as insulin sensitization. When blood glucose rises, it’s usually due to a stress response that occurs during high-intensity interval training, competitive sports, judged performances, or any other sports that involve quick bursts of movements such as soccer or football. Share & tag @type1diabetic_life . 🤸🏻‍♀️🏐⚽️
. . .
Source: Scheiner, Gary, MS, CDE. “Think Like a Pancreas, p 54-56. 📔//platform.instagram.com/en_US/embeds.js

Cheers to all my fellow #t1dmom’s out there battling the ‘betes 24/7/365 for their #Type1diabetic kiddos who are too young to not just comprehend this damn disease, but can’t even speak as to whether they’re feeling high or low yet. We are brave, resilient, and strong. We are our child’s best advocate against T1d and any school faculty member, nurse, or physician who think they know better than us. Share and tag @type1diabetic_life on Instagram and stay strong! You’re not alone. 💪🏼💙🙏🏼
. . .
That’s a wrap! Get ready for World Diabetes Day on Tuesday, November 14th. Follow @type1diabetic_life on Instagram for more daily diabetes awareness posts, cool swag, and udpates for the next givewaway (hint: I might do one on Tuesday or when that account reaches 500 followers). Much mahalo for your support and keep kicking diabetes in the ass.
xoxo,
Shelsea + Coral

Shelsea is a mother to her five year old Type 1 diabetic daughter, Coral, and non-D baby Kaila. They believe you can still have fun living with Type 1 and maintain a healthy Hba1C with little diet restrictions.

Get Social With Us